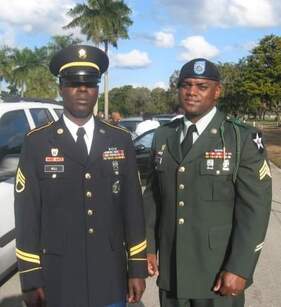 My oldest son has three children. He is always stationed so far away, I have only seen him 2 or 3 times in 10 years. I really wanted to be able to see my grandchildren more. I had not seen my grandchildren in quite a while and I had a new granddaughter that I'd never seen. Every time they crossed my mind, I would thank God for bringing them home. If I don't know anything else, I know that God loves us and answers prayer!

This is a dream and a word I received from God on....

January 8th, 2011
I dreamed last night that there was a banquet celebration and the auditorium was packed with thousands of people. I did not know at the time that it was a celebration for prodigals and their families. There were 3 men on the platform, 2 were sitting and one was standing at the microphone speaking. I instantly noticed one of the young men’s shoes and recognized them. I said “those are my son’s shoes” and I went running through the crowd of people to get to the front to see if it was really him. When I got there, I looked in my son's face. It was really him, and he looked like a totally different person. He was so happy like joy just surrounded him. The young man at the mic opened up a prayer and then said “welcome everyone to the Prodigals Conference Celebration and people were shouting and celebrating, flags were flying, horns blowing, and confetti was in the air. It was awesome.

I woke and praised God for the dream and asked what it meant.

TESTIMONY: 2 days after that dream I got the text from my son who is in the military. The text said that he is being stationed 2 hours away. They moved in March  2011. I cannot tell you the joy I have despite what it looks like.

TESTIMONY: I received this testimony on January 31, 2011, from one of the people I shared the word with. This is what she had to say. Please note: I do not post it for any Glory, but as confirmation that “God still confirms the word He speaks to His prophets” and that “the effectual fervent prayer of a righteous man availeth much”!!!

Her testimony…. Praise be to God, for he has answered my  prayer. My son re-dedicated his life back to Jesus. Thank you, Angeline, for  standing with me in prayer. He told me today that he read your message in  the link: Is Hell Real? Is Heaven Real...? Does Life Continue After Death?. He said that article and the prayer, he prayed to God was what led him to give his life to Jesus on today. I wasn't able to be at Church today, but I heard it was an AWESOME service. While he was at Church, I prayed for him asking the Lord to let something be said through the word or something done, that would lead him back into his presence. God has truly answered my prayer. Anyhow, he sends his thanks to you for that message that helped him make the decision. Love, in Christ Jesus! DM
Although God gave this word to me in 2011, the word still stands. If you have a prodigal receive the word that God gave. I want to agree with you for them. Submit a prayer request and I will agree with you in prayer.